Twice Gold and Once Bronze at Laser Europa Cup!!! 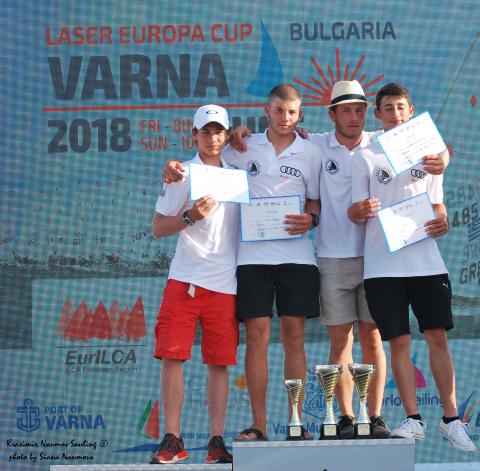 The three-day competition which is part of the circuit - Laser Europa Cup, this time in Varna -  Bulgaria, has brought us great joy for our team and the sailing sport in Burgas!
After the low wind during the first two days, our competitors have succeeded in capitalizing their success during the third day and seize two 1st and one 3rd position.

In the Laser - Standard class:

However, this does not affect Liyben`s success as they do not compete in the same age group.

David Binev has also seized gold in the U16 group, leading by 8 points to the 2nd Nikolai Vasilev - YC "Capt. G.Georgiev" Varna.

The low winds during the first two days, have not been in favor to Dimitar Shangov, but the considerably better wind conditions in the last day, have given him the required push to finish twice at in 2nd position and climb to third place, seizing the bronze in Boys U18 group.

We greet again our competitors and wish them to achieve more success in the next competition - Regatta "Cyclon" 2018 which will take place in Pomorie, Bulgaria between 15-17 June.