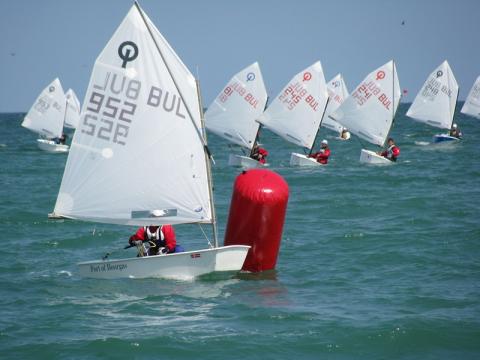 to be held at Yacht Club Port Bourgas, Bourgas, Bulgaria

[DP] denotes a rule for which the penalty is at the discretion of the International Jury.

[SP] denotes a rule for which a standard penalty may be applied by the race committee without a hearing.

1.1      The regatta will be governed by the Rules as defined in The Racing Rules of Sailing (RRS).

1.2     No National Authority prescriptions will apply.

1.3     The Class Rules of the relevant Classes will apply.

1.5     The language of the regatta will be English. If there is a conflict between languages the English text shall prevail.

2.1     Boats may be required to display bow numbers and/or advertising chosen and supplied by the Organising Authority according to ISAF Regulation 20.

2.2     Each boat shall be required to display her national country code on her sails.

3.1     The regatta is open to boats and to competitors who comply with ISAF Regulation 19 – Eligibility.

3.2     Eligible boats may enter by completing the attached form and sending it to the e-mail and fax in point 11 not later than 20th of April 2015.

3.3     In addition to the requirement of 3.2 competitors, team leaders, coaches, supporters, family and other personnel shall deliver signed entry form and register at the Race Office no later than 18:00 on 29th of April 2015.

3.4     For visa purposes, if needed, it is essential to receive the following data: full name of the competitor (or coach, team leader, supporter, family, friend, etc.) (as per passport); passport number, date and place of issue, expiry date and a photocopy of passport showing identification photograph and the details listed above. Details regarding expected arrival date in Bulgaria and entry point must also be included.

5.1     There will be no entry fee for participation in the regatta.

6.1     The regatta will consist of Single Series with 10 races for all classes.

8.1     Each boat shall produce a valid Measurement Certificate. If the completed Measurement Form is a photocopy, its authenticity shall be confirmed with an original stamp and signature from the issuing authority. If a boat is to produce a measurement certificate in accordance with Racing Rule 78.2, she shall do so before 10:30 on 30th April 2015.

8.2     Pre-race measurement inspections will consist of at least stamping of the sails by the Measurement Committee of the regatta.

8.4     Measurement inspections at random during the regatta may be organised.

9.1     Sailing instructions will be available during registration at the Race Office. Other documents governing the event will be published with the Sailing Instructions.

10.1    Regatta Port Bourgas - Bourgas Sailing Week will be sailed on the following classes:

The Port of Bourgas,

12.1      The course types will be the Olympic trapezoid and/or Windward-Leeward courses.

15.3     At least 4 races are required to be completed to constitute the regatta series.

16.4     All support boats shall have third party liability insurance with a minimum cover of EUR 200.000 per event or equivalent. A certificate of such insurance shall be shown during registration.

17.1      Prizes will be awarded to every boat placing first, second and third in each group and class, except the General overall placing in Optimist Class, which will not be awarded. Groups are as follows:

18.1      Competitors participate in the regatta entirely at their own risk. See RRS 4, Decision to Race. The Organising Authority and all parties involved in the regatta organisation will not accept any liability for material damage or personal injury or death sustained in conjunction with or prior to, during, or after the regatta.

19.1      By participating in the regatta competitors automatically grant to the Organizing Authority and their sponsors, the right in perpetuity to make, use and show, from time to time at their discretion, any motion pictures and live, taped or filmed television and other reproductions of the athlete during the period of the competition without compensation.

19.2     Boats may be required to carry cameras, sound equipment or positioning equipment as specified by the organizing authority.

19.3     Selected competitors may be required to attend a press conference.

20.1     Each participating boat shall be insured with valid third party liability insurance with a minimum cover of EUR 200.000 per event or equivalent. A certificate of such insurance shall be shown during registration.

General Information (not part of the Notice of Race)

Limited number of charter boats could be provided upon request on the basis first come – first served. Please contact the Organising Authority in order to check availability and charter fees.

Information about weather can be found on the following web sites:

Information about accommodation at hotels can be found on the following web sites:

More information about Bourgas and Bulgaria can be found on the following web sites: