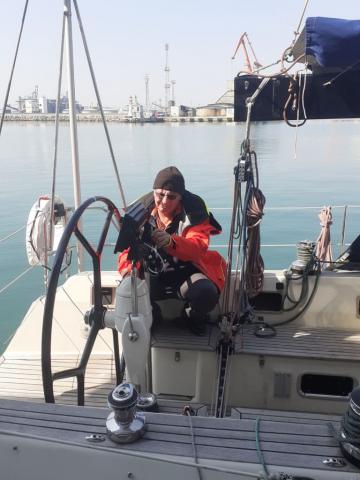 The Burgas sailor Mihail Kopanov embarked today on the adventure of his life. This morning he sailed from the Yacht club Port Bourgas to Plymouth, England. The deadliest regatta in the world, which will cross the Titanic, will start from the British port.

Brave yachtsmen enter the Atlantic Ocean alone in extremely difficult conditions - sub-zero temperatures, strong winds and waves of 15 meters. For more than 20 days they are alone with the ocean and the wind, the test is not for everyone. Only 30% of those who started finished, and some of the participants lost their lives after deadly shipwrecks.

However, Mihail Kopanov is not afraid of the challenge. Today his friends sent him away and wished him success.

The 58-year-old from Burgas is the most titled sailor in Bulgaria. He has dedicated his entire life to sailing. In 2017, they tried this route with a partner, but then their yacht crashed near Canada and it is a miracle that they both survived. Now the challenge for him will be even more serious because he is alone.

"I will be in the ocean for 21-22 days. The weather there is never good, imagine that there is an inclined plane and you throw billiard balls. The cyclones are going straight from Canada to England. I am against the current all the time, there are big waves, as well as thick fog, and the temperatures around Canada are very low, "Kopanov explained.

In the end, he thanked his relatives for complying with his dreams. He is adamant that he will do everything in his power to get through the deadly route.

We are proud to inform that Yacht-Club "Port Bourgas" has applied to host the upcoming Optimist...

Today was the final training day before the official measurment process which will start on 08/08/...

The annual National Championship "NON-OLYMPIC CLASSES JUNIORS" 2015 has finished.  On the...

The second racing day of the ongoing National chanpionship for non-olympic classes in Pomorie has...

The first racing day of the annual National Championship for non-olympic classes has finished....

Between 30th July and 2nd August 2015 the National Championship for non-olympic classes Boys...

The first start from the annual "National Team Championship OPTIMIST - Team Racing 2015" has...